Inspiration and Success, it is all around us

For those of you who have sent your kiddos off to college you will relate that today is a great day as Elizabeth is coming home from her freshman year of college.

She did awesome, I knew she would.

She is coming home with a little more independence, a clearer vision of her career goals, dear friends and a new beau.

She is also coming home with some pains of disappointment and joy of perseverance.

Elizabeth has played soccer her whole life, really truly, her whole life. Her first word at 6 months was "ball" and she was off and running.

She is one of those kids who has always been recognized her her hard work, determination, dedication to herself and her team.

She has played for the top travelling team in our area and been captain of that team for as along as I can remember.

She made the Varsity high School team as a freshman and was captain of that team her senior year.

She went off to college with the assurance of the college coach that she would get lots of time and he was looking for her to beome a starter.

A couple of injuries

And a season of frustration and disappointment.

I would lose sleep after those post game phone calls when she would be in tears of frustration as once again she didn't get any playing time.

The girl worked hard all season, she committed herself to off season work at the level she knew it would take to get a chance to compete.

She kept herself ready so that when she was given a chance she would be able to step up to the challenge.

This past weekend they had their Spring Scrimmage.

Elizabeth started that game, playing most of the 90 minutes.

And the emotions in the post game phone call to her me were as strong as they had been all fall.

Except this emotion was joy

"Mom, I played more in this game than I did all fall"

"I started! I didn't even play one minute on our home field in the fall"

It is tough to get knocked down for a whole season and keep going.

It takes a lot of mental strength and belief in yourself to keep getting up each day.

When you have always been viewed as a winner and someone questions your strengths, it can really hurt.

But Elizabeth had  the tools she needed to succeed:

a great work ethic and belief in herself

I love finding inspiration from the people around me.

I love it even more when I find it in my own child. 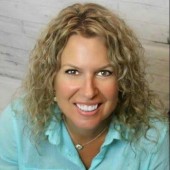 How to use your Facebook Profile, and not annoy the heck out of people

New posts...fresh off the press and in your inbox!

You have Successfully Subscribed!